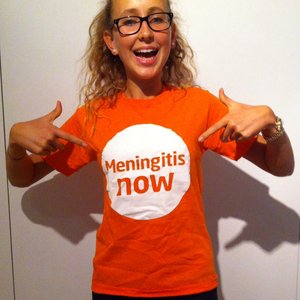 I was very lucky to survive with minimal after-effects and now fourteen years on, I am finally old enough to be a Young Ambassador

I contracted bacterial meningitis when I was just ten days old. My parents have told me about it as I was too young to remember anything. I became ill overnight and although the symptoms were mild to start with, my parents felt something was wrong and took me to the doctors first thing in the morning. I was very lucky as our GP identified it as possibly meningitis and we were sent straight to the Paediatric A&E at Chelsea and Westminster Hospital.

Within an hour of arriving there they had done a lumber puncture and confirmed the diagnosis. I was taken straight to an isolation ward where they started to administer strong antibiotics. Unfortunately, because I was so little, all my veins in my arms and legs started collapsing, so they had to put a line into my head in order to keep the antibiotics going.

All the hospital staff were fantastic, but for several days they did not know which way it would go – it was a terribly difficult time for my parents and it was then that our GP introduced us to the Meningitis Now who provided great support and masses of helpful information. I was very lucky to survive with minimal after-effects and now fourteen years on, I am finally old enough to be a Young Ambassador.

As a Young Ambassador this year, I have been raising awareness at my school, trying to have Meningitis Now voted as the school charity. I have supported runners in the London Marathon (not far behind Mo Farah!) and been getting involved in as much local fund raising as I can. I am very excited about the upcoming year with this amazing charity.