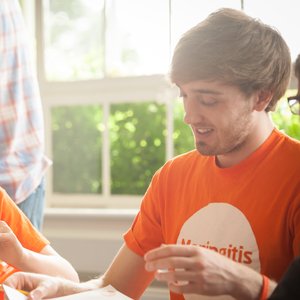 Recently I made a speech in the House of Commons, where I spoke to ministers, MPs, peers key health professionals, as well as celebrity Patrons

It seems to be the hardest place to spread awareness and support against this disease.  I also advise the management team on how best to talk to and educate 14-24 year olds about meningitis.

My baby sister Hannah died of pneumococcal meningitis and septicaemia at the age of eight months old in Bristol children’s hospital. Shortly after her death my family decided to support Meningitis Now, a charity which provides awareness in order to prevent the disease and support those who suffer directly or indirectly. The people at the charity are wonderful people, you feel like part of a family there because of how friendly and supportive they are.

In August 2013 my friend and fellow Young Ambassador Alex Williams died of a stroke brought on by his contact with meningitis. Even after spending most of his life in a wheelchair he was a funny, happy and amazing person to be around. He has been my wake up call to do more fundraising and raise awareness wherever I can.

Recently I made a speech in the House of Commons, where I spoke to ministers, MPs, peers key health professionals, as well as celebrity Patrons (Lisa Snowdon, Ian Rush, Ken Loach and Joanna Trollope) and trustees about the importance of the on-going fight against meningitis and told my story of Hannah and Alex and the importance of their support for Meningitis Now.

Over the years, we, as a family have done as much as we can for Meningitis Now. My parents and my sisters Sophie and Emma have done just as much as I have and should be praised for their devotion too. We have a Tribute Fund in Hannah’s name that now stands at over £28,000.