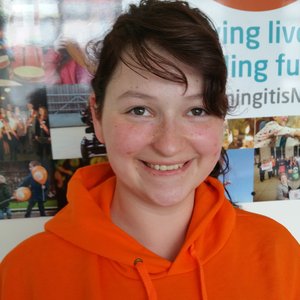 It was just a normal day, I was out washing the car with my dad and then everything changed.

I collapsed in the garage and was rushed to the royal hospital where they had to amputate both my legs through the knee, part of my left arm and parts of my fingers on the right. I cant remember much of what happened as I was very young at the time.

After I had recovered from the meningitis I then went to get my first set of artificial legs so I could walk and play with the other children.

As I got older I wanted to fundraise for Meningitis Now and to be able to raise awareness. I used to get someone in from the meningitis team to come and talk at my school but now as an ambassador I am able to go around school to raise awareness to all different types of age groups.

Since I have had meningitis I have achieved many things such as getting a gold Blue Peter badge, to getting on the Queen's New Years' Honours list and receiving the British empire medal (BEM), also to becoming part of the Irish Paralympic team and recently being accepted into university to study equine business management.

I'm looking forward to helping people from Believe & Achieve at events and raising awareness of meningitis so that people know the symptoms. I decided to become a peer mentor because when I was younger, I knew the struggles and I wanted to help someone else get through them.