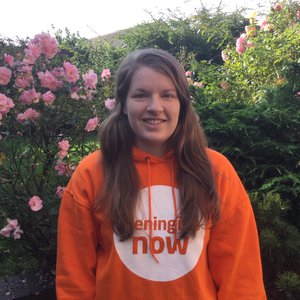 Dominic had a high temperature that had gone up to 105 degrees - this alarmed my mum. At that time there wasn’t any awareness of meningitis; the doctors didn't know what was wrong with Dominic and they thought it was tonsillitis.

Sadly, Dominic lost his battle with meningitis after three days on life support. I never got to meet my brother, which is very upsetting to me as it’s weird to think he’s my little/big brother. Although I never got to meet him, I feel as if I know a lot about who he was from photos and information that I have been told about him.

I like to think he is looking down on me from heaven and seeing the work I’m doing for Meningitis Now in memory of him. I hope that all of the awareness is helping millions of people and preventing people losing their battles with meningitis.

Since I have become a Young Ambassador, I have been a part of many different events. I went to the House of Commons reception, where we spent the day in London, talking to MPs about the MenB vaccine to try and speed up the process of releasing it on the NHS. I have also organised my own Toddle Waddle, increasing my confidence with public speeches for cheque presentations and many more.

My overall aim from being a Young Ambassador is to try and prevent as many people as possible from losing their lives, or being maimed by meningitis. By raising awareness and money for Meningitis Now, I would like to think Dominic is proud of me for the work I am doing.