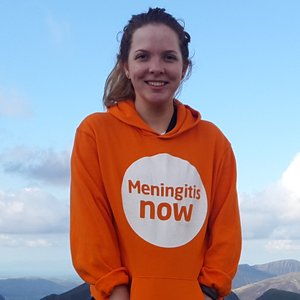 Within a few hours of complaining about feeling ill, Mum had deteriorated hugely. She was sick, unable to move, and had trouble communicating. It got to the point where she didn't even recognise me or my sisters. It was terrifying. We called 999 and she was rushed off to A&E.

Mum was in a coma for a week in the Intensive Care Unit of Neville Hall, and was diagnosed with having meningococcal septicaemia. She started to show signs of recovery and spent the next two weeks bouncing between there and the Cardiac Unit, as the meningitis had given her complications with her heart. When she came out of hospital, she was very weak and unable to walk or do basic everyday things. For the next month or so, someone stayed at home with her every day. A few weeks later, when she was stronger and able to walk with the aid of a stick, we helped her to use the stairs, and gradually she regained her independence. Today she has made a full recovery!

I didn't know anything about meningitis, and it was hard to believe how quickly it could take a hold of a person. That's when I found out about Meningitis Now, whose support I will always be grateful for. Though what Mum was going through in the hospital was horrible, I felt like no-one really understood what we were going through at home. I really struggled.

Meningitis Now has helped me understand what had happened and I could not have managed without them.

After everything Meningitis Now does for my Mum and my family, it is an honour to be able to give back to them as an Ambassador. The opportunities I have been given, as a means of helping raise much needed funds, and awareness for the charity, have been incredible. I have spoken on the radio, at fundraising events, in hospitals, even in Parliament. I've done several of the Meningitis Now organised fundraising events (3 Peaks Challenge, English 3000's, Skydiving) as well as organising several of my own. Last year I was even invited to take part in the Duke of Edinburgh Awards' inaugural Adventure Challenge, a self-navigated race through the Peak District - which was so special for me, as my Mum was able to join me. I know how lucky I am to still have her here.

For me, it is so important to enable Meningitis Now to continue to help and support people, the way they have for me, and so many others.

One of the main reasons I wanted to become a mentor was to be able to help and support people, the way that Meningitis Now have done for me and so many others.

As well as being an Ambassador for the charity, I'm a very active person and love to keep busy. Over the years I have been lucky enough to merge my active lifestyle with my work for Meningitis Now. I've completed both the Three Peaks and Lake District 8 Peak Challenges and a skydive, and been lucky enough to have been asked to speak in Parliament twice.

I studied Computer Forensics at university and am currently in training with the Army.