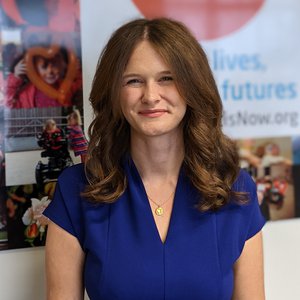 Holly was selected to be on the task force for the implementation of the first Rail Ombudsman scheme. This role gave her the opportunity to take on a leadership position, when she was appointed as the Lead Ombudsman for the scheme. Currently, she works as a Dispute Examiner at the Housing Ombudsman scheme which, set up by law, considers disputes between tenants and leaseholders of social landlords. Holly utilises her analytical skills to help resolve disputes in an independent and impartial way.

Holly’s academic background is in law, having achieved a scholarship to study her Masters in Human Rights Law at Cardiff University. She is passionate about diversity, inclusion and in particular, disability and mental health rights.

In 2019, Holly contracted bacterial meningitis and sepsis. She therefore has personal experience of the disease and is dedicated to raising awareness, describing her illness as "frightening". Having not been presented with a rash until her admission as an emergency patient to A&E, Holly assumed that she had the flu. She explains that, without the careful actions taken by her family, work colleagues and the NHS, she would have lost her life. Holly remains impacted by the disease and is registered disabled, suffering with chronic migraines and an acquired brain injury.