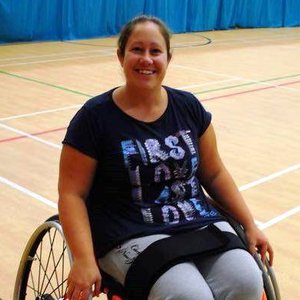 This has been the hardest journey I have ever had to face in my life, not only physically but mentally

In 2014, I was working as a Senior Civil Engineer at a large firm, living away from home during the week, living in ‘digs’ in shared accommodation, working 12 hour days and just returning home on the weekends to mostly sleep!

In March 2014, I was suffering from a cold/flu type illness. I had been feeling run down since the beginning of the year but had put it down to stress at work. I went to see my doctor and had been given antibiotics but on the night I fell ill, I knew there was something out of the ordinary.  It was Friday night and I was at home. My neck was stiff and I decided to take a bath. Whilst in the bath I began to deteriorate rapidly. I couldn’t get out and couldn’t shout for help from Ashely who was downstairs. I knew I had to get out of the bath and managed to push over a bathroom unit which caused such a noise that Ashley came to check. I was only semi conscious but Ashley thought I was just tired and put me to bed where I slept.

Later that evening I began to have convulsions. I couldn’t bear to be touched or look at lights. My neck was swollen and had a significant pumping sensation in my head. Ashely called the Out of Hours GP who recognised the symptoms immediately and told Ashley to take me to hospital.

I had viral meningitis

I spent a week in hospital initially and was discharged despite the fact that I couldn’t walk. I had told the staff that I had no feeling down the right side of my body but my concerns were dismissed. A few days later, I was readmitted to hospital by my GP who was horrified when she went to see me at home.  I spent a further 3 weeks in hospital and was finally diagnosed with Functional Neurological Disorder – which means that my brain wouldn’t tell the right side of my body what to do.

I contacted Meningitis Now 6 months later who organised for their local Community Support Officer to come and visit me. At this point I was feeling completely alone and unsure about the future.

This has been the hardest journey I have ever had to face in my life, not only physically but mentally. I haven't been able to travel this journey alone and I have and will need a lot of help along the way. Thankfully I have had an amazing support group around me: my husband, my family, my friends, my physiotherapy team and most importantly Meningitis Now.

The help and support from Meningitis Now is indescribable. Not only through the grants and services available but also just having someone there just to talk to. Someone who understands, cares and doesn't judge you. They have given and continue to give me the extra strength I need to continue my journey and just show that there are kind and amazing people in the world and in the end we are all there for each other.

It means the world to me in becoming a Community Ambassador because I want to give something back to such an amazing charity. I want to help people who have been in the same position as me, to raise awareness and most importantly try and prevent meningitis.

If there is any advice I can offer it is that; for those who have a journey to travel that is a hard and long road just remember for every mistake you make or how many times you fall, you are always that much further than those who have given up. This mind-set has really helped me so far. Also life is such a precious thing, I don't think you can fully appreciate it until you are so close to losing it. Enjoy every second of it and don't let certain things like work and money take over your life. Now I don't regret the things I have done, I regret the things I didn't do when I had the chance. In the end the key to life is happiness.