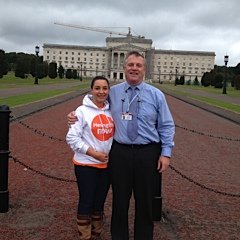 It’s a great honour to be a Community Ambassador for Meningitis Now, and my family and I will continue to fundraise and help spread awareness for the charity in Northern Ireland

At that stage neither my wife Alison and myself knew much about the disease, so when Steve asked us to do some fund raising in Northern Ireland, we both readily agreed – it was ironic that our son Michael contracted viral meningitis at the age of three, but because we recognised the symptoms early, and rushed him to hospital, he made a complete recovery.

Fund raising for the charity has been an absolute pleasure, and the generosity of people in Northern Ireland never ceases to amaze me – the walks made me see my own country in a totally different way, and it was very interesting to walk and talk with so many  people whose lives had been affected by the disease.

The introduction of the Men C vaccine in 1999, and recently the Men B vaccine in March 2014 has been a fantastic boost for everyone involved and is just reward for the Charity’s fundraising efforts.

Congratulations to my old pal Steve on firstly his M.B.E., and secondly his recent Honorary Doctorate from Bristol University – he has dedicated a large part of his life to fighting the disease, and it’s great to see him getting the recognition not only for the millions of pounds he has raised, but the inspiration he has shown to affected families.

It’s a great honour to be a Community Ambassador for Meningitis Now, and my family and I will continue to fundraise and help spread awareness for the charity in Northern Ireland.