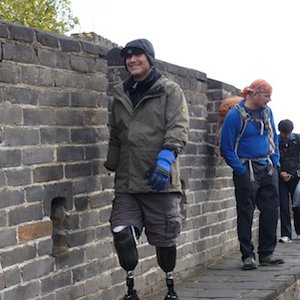 The next morning my son called to get an emergency appointment with our local GP. It took over two hours for the GP to call back to say that it was probably a winter virus. The GP advised that if my symptoms did not improve by the next day, I should make an appointment at the surgery.

At 2.30pm the same day, my daughters had to help me as I could no longer walk on my own, my joints and muscles were still in excruciating pain. A small rash started to appear, but as I often got rashes when I was cold my family didn’t think anything of it. Two hours later I was found on the floor, my daughters had to carry me to bed. I had pale cold hands; my wife found a bruise on my cheek, I didn’t know how it got there, and she found more on my wrist, waist and ankles, as well as a strange purple rash under my skin.

My wife telephoned the GP surgery who said that she should bring me to the surgery immediately. Still unable to walk the family struggled to get me there. On arrival to the surgery I was seen by a GP, and a second opinion was called for, they believed I had septicaemia. After being rushed to A&E, I was immediately surrounded by doctors and nurses who began the fight to save my life.

My family was told to prepare for the worst, and doctors gave me a less than 10% chance of survival. A few hours later, my organs began to fail and I was put on life support. I had contracted meningococcal meningitis and septicaemia. The disease caused extensive damage to my body and I spent five months in hospital.

During those five months, I had to have both legs below the knee, my right hand above my wrist and all of my fingers and thumb on my left hand amputated. Within 24 hours life changed for me and my entire family completely, the disease may have only taken a short time to strike, but its impact on my life has been enormous.  As a BT engineer, I could no longer do my job, my mobility had been severely restricted and undertaking simple everyday tasks was a constant challenge.

Meningitis Now has supported me and my wife, providing a friendly voice on the end of the phone and offering counselling for both of us.  Despite the severity of my after-effects I still live life to the full, playing football and learning to paint with my prosthetic limbs. In the autumn of 2012 I trekked the Great Wall of China to raise money for Meningitis Now.